The economic impact from weather-related shocks

In the past few decades, technology has increased the lead time we have to respond to increasing extreme weather events like hurricanes, tornadoes, blizzards and heat waves. As a result, people in impacted communities purchase supplies to protect their lives, homes and businesses. Then, they venture out again for supplies to rebuild and recover in the aftermath – a purchasing cycle that repeats with each event.
While advanced knowledge is important, extreme weather is becoming harder to predict,1 and the true scale of destruction is challenging to measure. This leaves a gap of knowledge that could prove useful to fill as extreme weather events become more frequent and damaging due to climate change.2
Tracking the retail cycle (from preparation to reconstruction) of how consumers and businesses respond is vital in gaining a more accurate measurement of the destruction felt by those on the ground. Businesses and governments could use those insights to prepare for an evolving future.
We looked at two recent significant weather events and their impact on the local economies: Hurricane Ian in the United States and extreme heat waves in the United Kingdom.3

Hurricane Ian in the U.S.

Many people flock to Florida for warm, sunny weather. But the southernmost state also has its fair share of hurricanes, which have intensified over the last few years.4Hurricane Ian was a category 4 disaster that made its way across the state in late September.
To understand the impact of Hurricane Ian on Florida’s economy, we looked at consumer spending in impacted areas versus the rest of the state.5 Looking at state-wide total retail sales (excluding gas and automotive6),spending increased in the impacted counties at least five days before Ian’s expected landfall, with residents rushing to stock up on necessities. Not surprisingly, this gain was more pronounced in counties on the expected path of the hurricane.

With the hurricane making landfall on Sept. 28, we saw a dramatic decline in economic activity as Ian charged across the state and residents hunkered down. Between Sept. 28 and Oct. 4, total retail sales were down 30% in the impacted counties.

Total retail in Florida (excl. gas and auto) as of Oct 4, a week after Hurricane Ian made landfall 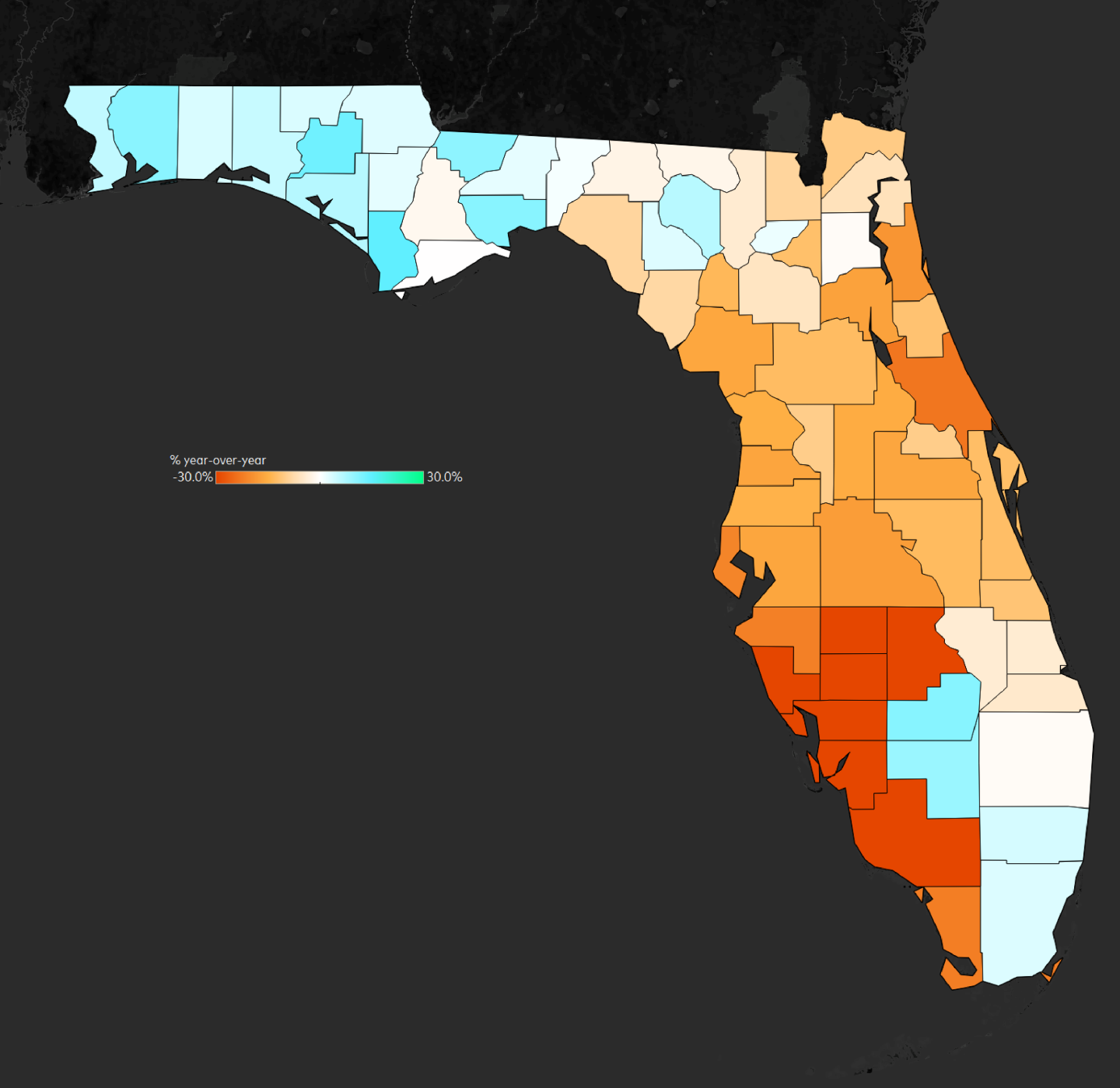 Looking further across retail sectors between Sept. 28 and Oct. 4, we saw the biggest drops in discretionary spending categories, such as jewelry (-30%) and electronics (-25%). Restaurant (-23%) spending also declined in that same period, likely due to weather-related closures and a focus on rebuilding efforts. Gas shortages and supply disruptions impacted gas station sales, down -35%.
Meanwhile, spending on lodging didn’t crater as much, as residents sought shelter at hotels and motels, and FEMA provided reimbursements for temporary housing.
We are now seeing the signs of recovery across Florida’s impacted areas. By Oct. 11, spending (excluding autos and gas) had surpassed pre-hurricane levels and jumped by nearly 50% by Oct. 15. In addition, there was a meaningful pop in spending on home furniture and furnishings, which likely reflects the need to rebuild and refurnish homes. 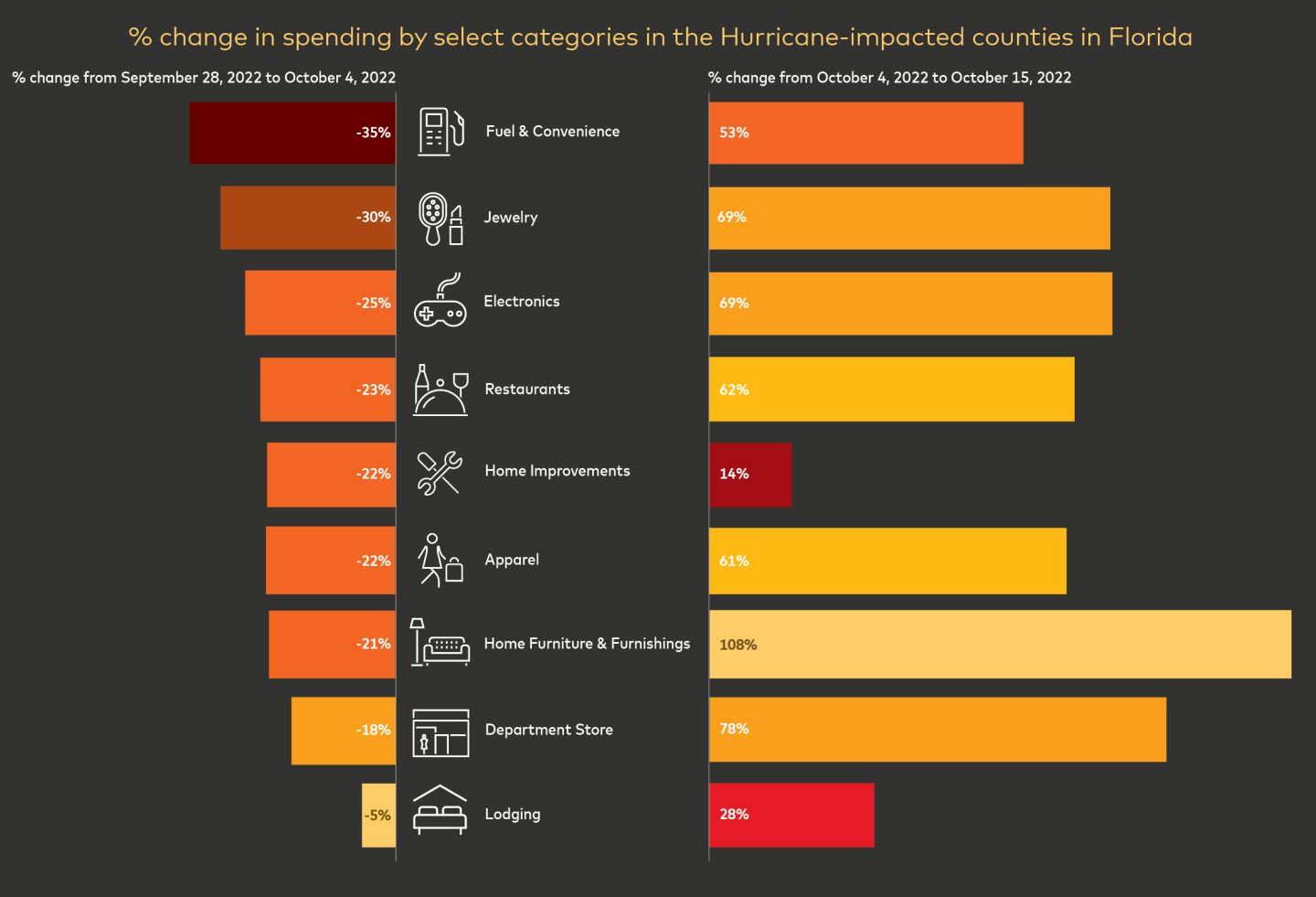 Heat wave in the U.K.

Weather in the U.K. can be unpredictable, but the summers typically bring mild, even tolerable, temperatures. Not this summer. The U.K. experienced three record-setting heatwaves in June, July and August.
On July 15, the United Kingdom Meteorological Office declared a national emergency. Four days later, a record temperature of 104.5 degrees Fahrenheit (40.3 degrees Celsius) was recorded in Coningsby, England, breaking the previous record of 101.7 F (38.7 C) set in 2019.
To evaluate the impact of these heat waves on consumer activity in the U.K., we focused on “in-person” spending since many public and private places in the region lack central air conditioning. Only 30% of retail establishments in the U.K. have air conditioning,7 and most buildings are not able to accommodate modern-day cooling.
We hypothesized that consumers might be less willing to do any shopping or eating in person, so we narrowed our analysis to restaurants and eateries – where people may be indoors for a considerable amount of time or sitting at an outdoor eatery in blazing 100 F heat.
Of the three summer heat waves, we decided to analyze the August episode because Scotland was largely spared, while England again faced rising temperatures. This allowed us to isolate the impact of the heatwave by comparing trends in the two countries.
As the temperature began to creep higher, in-person spending at restaurants in England dropped while in-person restaurant spending in Scotland grew. Growth rates diverged by almost 5% between Aug. 9-15, potentially due to an influx of visitors from the south seeking refuge from the heat. As the temperature cooled in the second half of August, we saw the trend lines converge again.

But what happened to spending in less heatwave-sensitive categories like electronics and furniture? Spending in those categories stayed the same – no sign of the South and North divergence we observed in restaurant spending.

Extreme weather is becoming a more significant risk for retail businesses. Understanding how these weather events impact the economy and the change in consumer behavior is essential for risk mitigation and adaptation. The increasing frequency and magnitude of extreme weather events may prompt consumers to make more permanent decisions based on weather, such as relocating, impacting migration trends. At the same time, companies will invariably incur additional costs associated with adapting to the changing climate, such as building resilience and investing in fixed capital (think heating, ventilation and air conditioning).
As the winds blow harder on economies worldwide, businesses must have the economic insights to stay informed and make data-driven decisions. Learn more about the Mastercard Economics Institute.
1 “Climate change could make weather harder to predict,” Washington Post, Jan. 25 2022
2 "Mapped: How climate change affects extreme weather around the world," Carbon Brief, August 4, 2022
3 This analysis is based on Mastercard SpendingPulse™, which measures overall retail spending trends across all payment types, including cash and check.
4 “Hurricane Ian's rapid intensification signals climate change's impact,” The Washington Post 5 To avoid the ambiguity in determining which counties were meaningfully impacted by the hurricane and which were not, we used the list of Florida counties that were deemed eligible for disaster relief by the FEMA. As of September 30, the residents of Orange, Osceola, Polk, Seminole, Charlotte, Collier, DeSoto, Hardee, Hillsborough, Lee, Manatee, Pinellas and Sarasota counties were approved for disaster assistance.
6 Total retail sales referenced throughout excludes gas and automotive unless mentioned otherwise.
7 A study conducted by the Building Research Establishment in 2012. 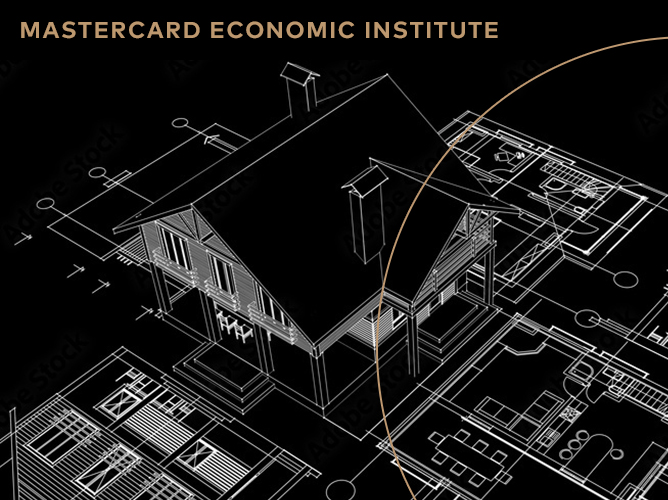 A View on US Housing: Today and Tomorrow

Pandemic-induced changes in the US housing market have been significant. Experts from the Mastercard Economics Institute look at where the market is headed and how consumer spending is impacted.

After 2+ years of limited mobility, the travel industry is staging an impressive comeback. Developed by the Mastercard Economics Institute, this report provides an in-depth analysis of the travel industry’s recovery around the globe and trends in travel to watch in 2022 and beyond. 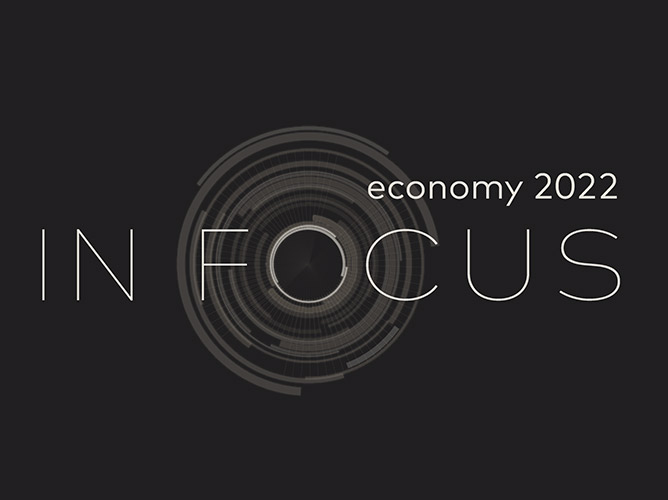 Economy 2022, a global outlook report developed by the Mastercard Economics Institute, focuses on 5 key trends and how they may evolve in the year ahead -- savings & spending, supply chains, digital, risk, and travel. 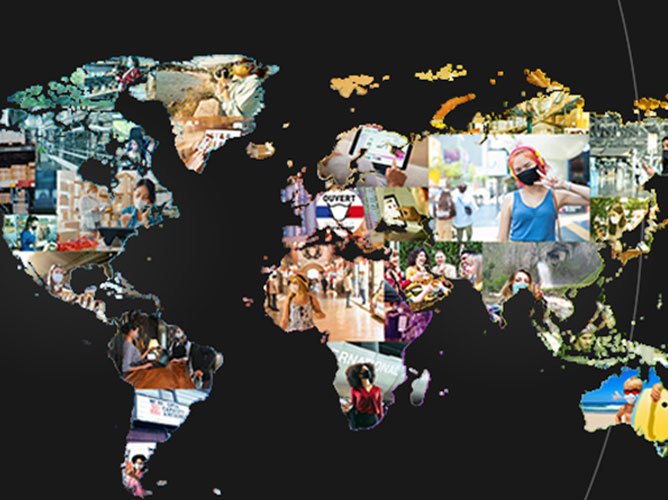 The global health crisis affected small and medium-sized businesses (SMBs) in vastly different ways. Learn more about the outsized impact to small businesses around the globe, including store closures and launches, digital innovation and their future outlook.